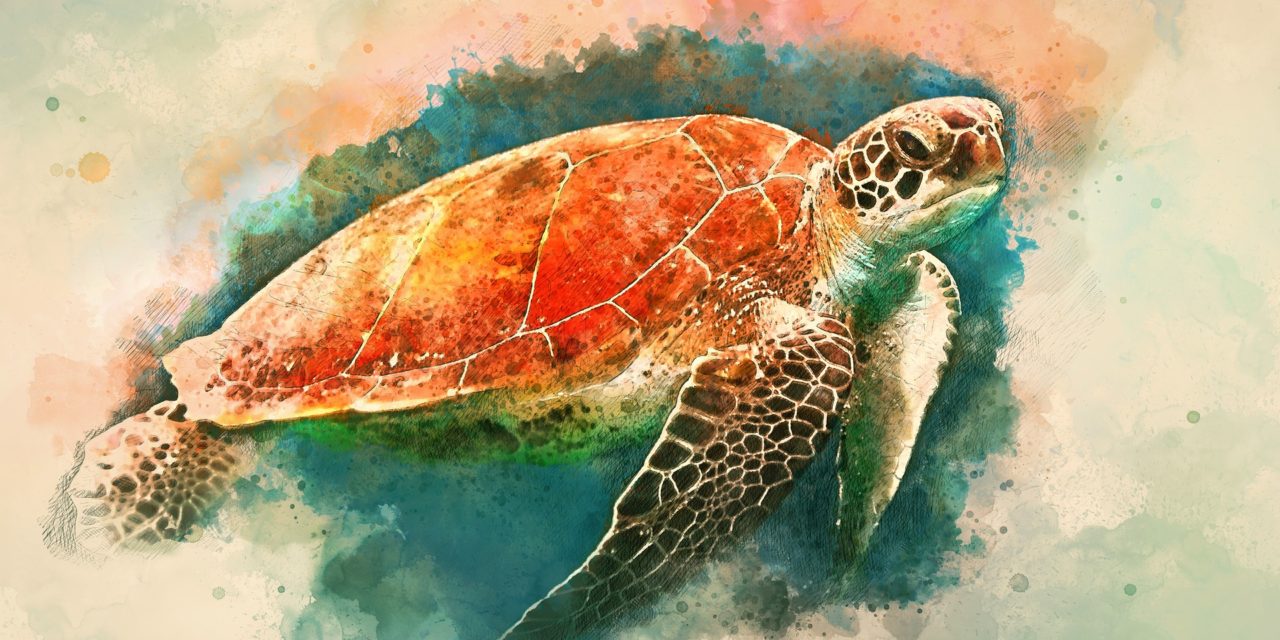 According to Biedermann’s research, there is an interpretation of the tortoise in psychology as a symbol of meek strength and a possibility of refuge from any external threat.

“It protects something from the ancient silence of life, which in danger always manages to crawl back into itself”

The turtle is always asociated with wisdom, and in Chistianity the turtle is a symbol of the earth, in all of Europe’s understanding the turtle is “decent love, longevity and heritage”, in ancient Mexico: good luck, endurance, protection. In China Ao is a giant turtle symbolic of our planet Earth, in India is the prime god Vishnu.

In patristic (philosophy and theology of the church fathers) we find the tortoise as a symbol of the earth, and St. Ambrose ties the tortoise’s shell with the ancient lyre – a stringed instrument with a tortoise shell as a base and seven strings. In pre-Christian times, the shell was used for magic, an amulet against evil eyes, preventing storms, hail or black magic.

In the early Christian period, St. Jerome says that the tortoise is a symbol of sin, of the burden of sin, and that it is a “symbol of evil in battle.”

A symbol of fertility was the act of laying many turtle eggs. Thus, throughout European antiquity, the tortoise retains this omen of “meekness and restraint,” decent love, longevity, heritage.

In ancient Mexico, the tortoise was a symbol of ancestors, endurance, protection, good luck, hope and happiness.

In North America, the tortoise holds the world by its shell. Many indigenous peoples who believe that the tortoise is in the genesis of the world call North America the “Turtle Island.” The North American Cheyenne tribe, the “Great Spirit of Inspiration,” is called Maheo, who kneads mud until it expands so much that only the “Old Granny Turtle” can take it on its back. In the tradition of hodenosaunas, tremors are considered the setting of the World Turtle.

In South America, the tortoise in Tahiti is considered the “master of the oceans”, in Polynesia – is a symbol-personification of the deity of war Tu; and according to other South American myths, jebuts (“earth turtles”) acquired their healthy shell when they fell, trying to go to heaven with a eagle to celebrate.

China – Ao – in the ancient Chinese idea it is a sea turtle of enormous size, on which rests the earth, which ensured the stability of the world. Mount Ao-Shan rose on the Isles of the Blessed. The tortoise was depicted as a fire-eater and was painted on rooftops to prevent fires.

The tortoise in the Chinese tradition is one of the Five Sacred Animals and represents the element of water, both the North direction and the Winter season. Pieces of the tortoise’s shell were used as elements for interpretation and divination.

The tortoise also had a negative meaning, called “gui”, which also means “male genitalia”. Because she mated with snakes and had no sense of shame, and existed only as a female animal.

India – the tortoise was considered the second incarnation (Avatar) of the god Vishnu.

Tibet – the turtle is a symbol of creativity and creativity. In feng shui is the water element along with the tiger, phoenix and dragon, which represent the other three life-giving elements.

In ancient Egypt – The tortoise was a complex symbol, and the terrestrial animal itself and its species had various applications in the life, myths and life of the Egyptian. It was the basis for making palettes in Ancient Egypt. The earliest images of a tortoise in Egypt date back to pre-dynastic times. The symbol of the tortoise was against evil energies, for protection, life-giving and good energy, and this is evidenced by Egyptian art, in which images of turtles can often be found. Magic knives with painted turtles were to protect children and the home.

Hunters had shields from a tortoise’s shell, a man was buried under a tortoise’s lid in the Heloan dynastic tomb, and turtle species were also a delicacy from pre-dynastic times to the Old Kingdom, later denounced as “the abomination of Ra.” . Land tortoises are used for the bases of lutes, harps, mandolins and norva (a banjo-like instrument).

In ancient Mesopotamia – Enki, god of Mesopotamian myth, was associated with the symbolism of the tortoise. In the myth of Ninurta and the Turtle, god Enki thwarts Ninurta’s plan to usurp power by creating a huge tortoise that bites his ankle.

Lyre from the 5th century BC. is evidence of a tortoise body of the instrument, as well as coins, stone stelae, frescoes are depicted with the deity Apollo playing the tortoise lyre. The myth of Apollo tells the story of how his brother Hermes stole Apollo’s sacred cattle. Apollo found out about the theft and went for revenge, but Hermes made him a turtle lyre. Apollo liked the lyre very much and has been playing it ever since. The nine muses followed him everywhere, and he was the most exquisite in his music.

The instrument usually has two fixed upright arms (pechei) or horns (kerata) and a crossbeam (zigos) with tuning pegs (kolopi) of bronze, wood, ivory or other bone.

According to legend Orpheus perfected the instrument that Apollo gave him of gold. It is interesting to mention that the guitar (kithara) was a stringed musical instrument associated with the lyre, played by the ancient Greeks, which is closely associated with the god Apollo, although in mythology his invention is attributed to Hermes. Musicians (kitharistu) needed great skill to play this difficult instrument, and it was usually played on the accompaniment of a song (kitharodeia).

Among the aborigines in Australia, the tradition is to pass on the mythology of the creation of the world. They often interpret rock paintings for which there is no exact dating, but scientists speculate between 15 and 60,000 (thousands) years of time. Various totem animals are found in the rock paintings, one of which is the tortoise. Even if there is little data and the dating dates are tens of thousands of years, it is safe to say that the tortoise is one of the most ancient painted totem animals known to us in the written and pictorial culture of human civilization.

It is interesting to add that in addition to being one of the most ancient symbols, it is just as ancient as an animal – it predates snakes, crocodiles, alligators. It is believed to have existed as far back as the time of the dinosaurs 200 million years ago.

The tortoise’s shell is part of the entire bone structure, which is made up of more than 50 bones, along with the thorax and spine, and develops in parallel with its entire body, so a tortoise cannot be born outside its shell.

The oldest recorded turtle died at the age of 188 and is called Tu ”i Malila on the island of Tonga.

The largest turtles are of the Giant Galapagos Tortoises species. From the nearby islands around the Galapagos, scientists have made an artificial habitat, and unaware that they are taking different species from the giant tortoises, a new cross has emerged. The most massive representatives of this species reach 417 kg. , as the record of the biggest is 498 kg. By comparison, Hafthor Bjornsson, the strongest man on the planet at the moment, who set a new world record for a deadlift of 501 kg, with a lot of training would lift one of these turtles and lift the record turtle briefly in the air.