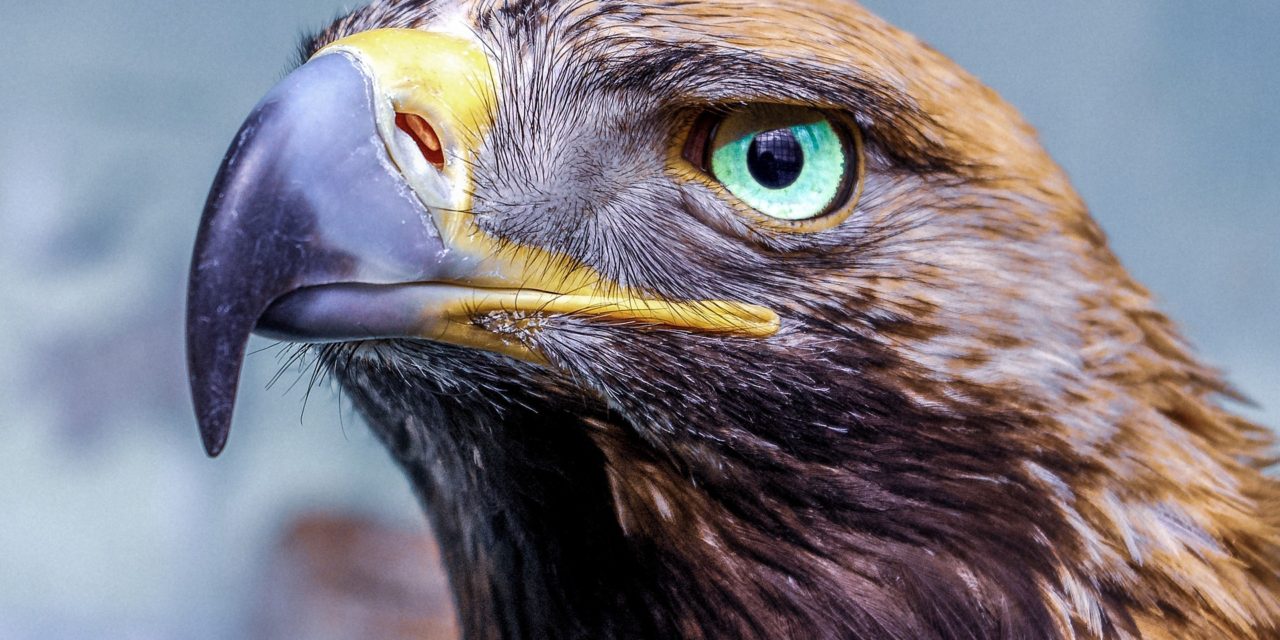 The “King of Birds” is known as a symbol of the storming power and defensive fighting ability, which is why it is first seen as a heraldic symbol on many coats of arms and state emblems, where based on symmetrical stylization it is often depicted with two heads (double-headed eagle). ). Ancient animal books attributed to him the ability to look at the sun without blinking and to cross celestial regions inaccessible to humans. An ancient Babylonian text, unfortunately preserved only in fragments, reports the celestial march of King Etana, carried to the heights by an eagle.

According to ancient records, at the burial of an emperor there was a custom to send an eagle in flight at the same time as burning the corpse, which symbolized the soul of the deceased joining the gods.

In the Syrian city of Palmyra, the eagle was dedicated to the sun god.
It was said that, like the Phoenix, it could rejuvenate (by the way, by diving three times in the water, which made it a symbol of baptism and depicted on baptismal fonts). His flight in the heights was understood as a parallel to the Ascension of Christ. It was believed that the sun also rejuvenated him (“The eagle, if its feathers begin to drip, in the sun it rejuvenates, renews”, Hoberg, 1675) – an indication of the graceful influence of spiritual light.

As a destroyer of snakes and dragons, the eagle is a symbol of the victory of light over dark forces; eagles with snakes in their beaks have been depicted in many cultures, such as the coat of arms of Mexico. Gothic window panes show how the eagle endures its still incapable of flying young in the heights to teach them to look at the sunlight. In Christian iconography it is found as a symbol of the Evangelist John, as an attribute of the ascended prophet Elijah and the risen Christ. In addition, he was generally attributed positive qualities (strength, renewal, contemplation, insight, royalty), which in antiquity made him an attribute of Jupiter.

In Christian times he was associated with justice as a royal virtue, but also with the sin of arrogance, apparently because of his distant gaze, which seemed to ignore what was in the immediate vicinity.

Among the Freemasonic symbols, the double-headed eagle with a crown covering both heads and a sword clamped horizontally in its claws are a symbol of the thirty-third degree of the Scottish ritual (motto: Deus meumque ius, meaning “God and my right”).

Cuauhxicalli, the eagle, is the name of the fifteenth sign of the twenty-day Aztec calendar, a symbolic omen that foreshadows the belligerent qualities of those born under this sign, but also a tendency to steal and rob. “Eagle and Jaguar” were called in the Aztec community of warriors two military “orders” as elite combat units, which thus embodied on earth the dualistic system of celestial polar forces (Sun and stars), and as symbols represented the largest bird, on the one hand, and on the other, the largest terrestrial predator in Mexico.

The goddess Coatlicue (“The Serpent Woman”), who bore the epithet Cuau-Seattle, meaning “eagle woman”, was adorned with a crown of eagle feathers and revered as the mistress of the deceased mothers (the birth of a child was considered equivalent to bringing a prisoner and qualified as a military feat).

In ancient China, the eagle was also a symbol of strength and power (his name “ing” was the same as a hero). An eagle perched on a rock represented the lone fighter, and an eagle on a pine tree represented longevity with preserved strength. The snake-fighting eagle ascends to the Indian Garuda, reminiscent of the image on the coat of arms of the Aztec capital Tenochtitlan (now Mexico City).

In the Central Asian Huns (“Xiong-nu”), the eagle was also a ruling symbol.

In European heraldry, the eagle with the lion is the most common animal on the coats of arms, but always in an unnatural and symmetrically stylized form.
A consequence of the heroic qualities attributed to the eagle was the fact that many rulers placed it on their coats of arms, such as the German kings, the Bavarian, Silesian and Austrian dukes, the Margraves of Brandenburg and the Polish kings.

The desire for symmetry in the flat reproduction of the full face has long led to the figurative representation of the “double-headed eagle”, which could be observed in the old Orient. From 1433 it was depicted on the coat of arms of the Roman-German emperor. After the disintegration of the Holy Roman Empire of the German nation (1806), it was a symbol of Austria-Hungary (until 1919), as well as of tsarist Russia (resumed after the change), of Serbian kings and – without interruption – part of the state emblem of Albania.

The origin of the double-headed eagle is speculatively related to the dual function of “Roman-German emperor” and “German king”. Minnesinger Reinmar von Zwetter had a three-headed eagle with heads and the best wings. Comparing the etymologically related German words Adler “eagle” (literally “noble eagle”) and Adel “nobles”, the German herald and historian A.G. Böckler noted in 1688, in art form:

“From the imperial eagle come the German nobles. If it weren’t for him, they wouldn’t exist. The Imperial Eagle is the best defender of the nobles, under the shadow of its wings, they are the most protected.”

“Among the birds, the eagle is a king who can look at the sun with a stern gaze, never loses his prey, rejuvenates, can fly the highest, and bird fortune tellers always consider him a sign of future victory. And since Romulus first saw an eagle on the Mount of Authenticity, he took it as a good omen, and therefore made the head of the army, instead of a banner, invariably carry an eagle. But because there are six species of eagles that, without exception, feed on prey, only the smallest and worst encroach on the carcass. The eagle is not a person of imperial dignity, but the coat of arms of the Roman Empire. An eagle on a yellow field signifies the Lord God, whose star shines brightly and he creates peace, and the other exudes constant fear.”

In psychological symbolism, the eagle is understood as a “mighty winged creature in the celestial blue of the spirit“, which is why the dream of an eagle is evaluated positively. Doubtful aspects appear where “eagle thoughts” attack the inventory of everyday life and because of them the course of life, obsessed with the “corrosive passion of the spirit“, is called into question. For this reason, it becomes clear why the eagle has become a symbolic animal of the evangelist John, who is most predisposed to the spiritual realm. Under this sign, the inevitable compromises of practical life can often not be expected.

Medieval books on bestiary animals compare the eagle to the first father Adam. The “king of beasts” soars to infinite heights, but rushes to the ground as soon as he sees earthly food. At first, Adam also hovered near the heavens, but then he saw the forbidden fruit that drew him to earth. “After his unique flight in all, he was again satiated with the flesh of bodily desire and lost all spiritual enlightenment” (Unterkircher).

Myth of Etana and the Eagle

The myth was composed during the time of Sargon of Akkad (2234-2279 BC), as evidenced by cylindrical seals, and the fragments were restored and translated from plates from the 7th century BC. The myth tells the story of Etana, the pre-flood ruler of Kish, who ascends to heaven on an eagle. History reveals the founding and construction of the great city of Kish, where the gods surround the city with high walls and then begin a careful search for a king to rule the city. Etana was finally chosen by Ishtar / Innana to rule and he built a sanctuary for the god Adad.

The myth is quite long and I put only part of it with an emphasis on a very curious action – while all over the world myths about the eagle describe it as a noble symbol, in the myth first the eagle is very insidious and then the god Shamash gives him the opportunity to atone for his sin and then he obeys his command and helps Etana.

Eagles’ vision is about 4-5 times better than that of humans. Due to their location on the head (about 50% is occupied by the eyes, with an acute angle for greater coverage), they can cover much of the landscape. Also, they see five primary colors, and can see UV light.

Eagles are monogamous, and therefore can use the same nest year after year. Nests are built by both male and female eagles. They can be located in the high parts of tree branches or in rocks, depending on the type of eagle.

The smallest eagle is 45-55 centimeters long, while the largest is about 91-106 centimeters.