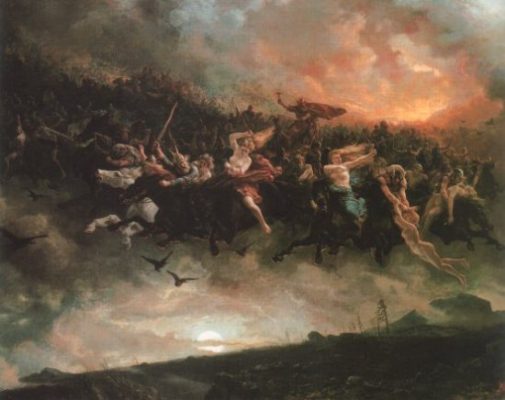 Gods of War and the Beginning of the End

The greatness of the gods, nature, and the Nine Kingdoms, as well as the established order, could not prevent the coming of quarrels and even wars. City against city, neighbor against neighbor, brother against brother, family broken, fathers against sons, mothers against daughters. That was it, the End of the World was coming.

The sand became iron, the rivers red. Three years of chaos, the first winter bitter to the eyes to tears, the second cheeks to blood; the third swallowed everything. Summer was engulfed in eternal winter. Snow called Fimbulvet, clouds, storms, ice.

The sacred well of Urdabrun froze in ice. In it was one of the roots of the Tree of Life, Yggdrasil, and the fountain of destiny has dried up. Yggdrasil’s other roots rotted, and the dragon Nidhogg finally gnawed at the root that was in the ice. The leaves of the tree faded. The Norns couldn’t do anything to save the tree, it perished, and all living beings were helpless before the End.

Everything was shaking, mountains were collapsing, rocks were rolling. And so, as prophesied, this is what happened. The evil dog Garm, the pet of the witch Hel, untied himself with a howl. The huge wolf Fenrir tore the shackles and finally freed himself, ready to rage, for the end. Fenrir’s father, Loki, who was tied to his other son Nari’s intestines, also freed himself, transformed into an animal and escaped from the cave.

The waves roared, the winds whistled, and there were three crows. It was the red rooster of the goddess of the underworld, Hel, inviting him to the rooster Gullinkambi in Valhalla, and the rooster Fjalarr in the forest of giants. The three harbingers awakening Ragnarok’s bloodthirsty cry. Loki went to his daughter Hel. Heading the army of the dead, these were the wars that fell in battle without honor and dignity. The dragon Nidhogg dug a hole in Hellheim, through which the army of the dead led by Loki, to join Ragnarok.

A branch of Yggdrasil broke and struck the serpent wrapping itself around Midgard, biting its tail, Jormungand. He dropped its tail and killed every sea creature, small to large, with its poison. It went ashore and crawled to the Vigrid field. The released huge wolf Fenrir joined him on the battlefield.

The ice giants boarded a ship and headed for Vigrid. On a second ship, Loki with the army of the dead, called Nagelfar, made of the nails of the hands and feet of the corpses, also sailed for Vigrid.

The fiery giants, led by the mighty Surt and his fiery sword, crossed Bifrost, and he cracked under their heavy footsteps.

The hour has come – Heimdall blew the horn of Gyalahorn and woke the gods. Everything that happened could not wake them, but Ragnarok’s hour came from the horn of Heimdall and the time came for the last battle of the gods and the era of the Aesir as rulers of the Nine Kingdoms.

Odin mounted the eight-legged horse Sleipnir and raced to the well of the wisdom of the giant Mimir to seek advice. But the eye he sacrificed, and which he watched from Mimir’s well, showed him enough that everything was decided by battle, such was the life of the Aesir always.

The gates of Valhalla opened: hence stepped forth the warriors that Odin led for the last battle. These are the warriors that the Valkyries took from the battlefields and judged to be with dignity and valor in battle, real warriors with military spirit and courage. Only Odin could lead the army of these warriors and did so – a dignified leader with a twinkling eye and the spear Gungnir in hand. He led the army to Vigrid.

Odin and Fenrir immediately descended on each other. Everyone else followed and the battle began. The giant Surt swung his fiery sword at Frey and cut him down, not before Frey could drive his horn into him. But now, remembering when Frey was courting Gerd, his servant Skirnir had taken his magic sword. At that moment when he needed the most his magic sword, he fell dead on the battlefield.

Hel’s dog, Garm, attacked the god Tyr and tore off his throat, but Tyr managed to drive his sword into the dog and it died. Thor killed giants left and right. His thirst for great blood was unquenchable. The great serpent Jormungand lunged at Thor, and Thor smashed his head with the hammer Mölnir, but struck him so hard that the poison splashed and Thor fell to his knees poisoned.

Finally, Loki would slaughter the gods he so hated and confront Heimdall. The two threw their spears at each other and killed each other at the same time.

Odin, on the eight-legged Sleipnir, faced the great giant wolf Fenrir. The wolf had been looking forward to the battle since he had been locked up on the island of Lyungvi and bit off Tyr’s hand, the rabid wolf thinking only of Ragnarok. And here, Odin and Fenrir rushed. Odin stabbed Gungnir spear into Fenrir’s chest, but the wolf did not fall, and swallowed Odin whole. Odin’s son, Vidar, saw what had happened and attacked Fenrir. With one foot he covered the lower jaw of the beast, with both hands the upper jaw, and with his incredible strength opened the mouth of the fierce animal, splitting its head. Fenrir fell dead with his head open, but Odin was already dead.

The fiery giant Surt, with his flaming sword, swung and set everything on fire before falling from his deadly wounds.

The Nine Kingdoms shook, bursting into flames. An icy wind finished off the battlefield. Yggdrasil swayed, burned, disintegrated, and each of the kingdoms that Yggdrasil kept, sank into the sea, until finally the Tree of Life itself collapsed and died in the ruin of everything and everyone.

The cycle and saga of the rule of the Aesir over the worlds was over. Kingdoms destroyed. But then, the earth emerged from the sea again, and the Sun gave birth to a daughter, who appeared now with a new dawn.

The light returned, plants began to cover the new land, fish filled the seas, birds fluttered in the air. From the chaos began a new cycle of life – like the three sons of the first god Bohr, who laid the foundations of the world from the corpse of Yumir at the beginning of creation.

A couple of men, Lif and Lifthrasir, emerged from the ashes of the ruined Yggdrasil tree. They were hidden by the gods in the trunk of the Tree of Life, and now they were the new beginning for the people who would inhabit the new earth. And her name will be Idavollr, in place of old Asgard.

The sun god Balder, his blind brother Hoder, who had killed him earlier; their brother Vali, who killed Hoder – survived and returned alive. Vidar, another son of Odin, as well as the sons of Thor – Modi and Magni, also came to life, and the latter saved the hammer Mölnir. Hönir, the last survivor among the gods, who before was silent, now prophesied – saw everything and told everything. From the old order and pantheon, these seven Aesir would lead Idavollr, and with the pair of men, Lif and Lifthrasir, build the new order.

However, the dragon Nidhogg also survived. He took the place of the guardian of the gate of death – those who were not good in life, found themselves in a cold place in front of him, and he sucked everything until only the skeletal remains of the unfortunate. In front of a gaping door to the north, amid a raging river of poisons, there was the terrible dragon.

From chaos arises order, from order chaos. The eternal cycle of beginning, end, and beginning again. 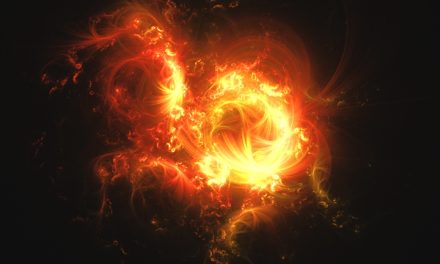