High, high in the clouds, was the home of the most powerful of all the chiefs, Niame.
One day he decided to get married. He summoned the four most beautiful girls of his tribe and asked each one of them:

“What if you married me?”

The first, which was called Akoko, answered immediately:

“I’ll clean your house by myself and keep it clean and tidy.”
The second said:
“I’ll cook the best meals for you and I won’t complain if you always invite a hundred guests to your table.”
The third said:
“I’ll spin the cotton mountains for you, and I’ll bring you fresh water from the river every day.”
Finally the fourth laughed and said:
“And I, Niame, will give you a golden son.”

Of course, Niame chose the last one, which was the most beautiful, and raised a rich and brilliant wedding.
Now, I have to tell you that the choice made by Niame angered Acoko, who, concealing her envy, managed to deceive others so well that she stayed in the bride’s house as a confidant and close friend of the bride.
One day Niame had to go far to plant his farm at the end of the forest. Just when he was gone, two twins were born in his home.
The insidious Acoco took the two children secretly and put them in a basket, ran outside, found two large frogs, and returned to leave them in the cradle of the newborn.
Then she left home with the basket and entered the woods until she found a dry hollow tree. She left the basket there and hurried to Niame’s farm.

Can you imagine what Niame experienced when he found two large frogs instead of a golden boy. He ordered these ugly animals to be killed, and his unhappy wife was driven out of his home, leaving her to live in the most desolate place of her possessions, in the white clouds only.
But it happened that a hunter passed at that time by a hollow tree in the heart of a large forest. His gaze was attracted by some light coming from inside the log.

And inside two voices answered:

“We are the sons of Niame.

The hunter opened the basket and saw two wonderful children. He was very surprised and at first did not know what to do, then decided to take them to his hut and not tell anyone where he had found them.

The hunter was very poor and always needed money when he needed money, taking less than the gold or silver dust, which was constantly being dipped by the children, and going to the nearby town to buy food and clothing. He soon became a very wealthy man and built a huge house in the place of his collapsed hut. Other houses appeared around her one by one, so many that they formed a whole town.
Not far from there lived the Anans spider. One day he decided to go to the forest to collect some white ants. He had not been to these places in a long time and was surprised by the fact that he found a nice big city in the place of the wild forest.
The curious spider entered the village and, after questioning the Tozons, found out when the city was built and who was its master. Then he walked through the big house and saw the hunter playing with two very nice children – one gold and the other silver.

“Where did I listen to talk about two such children?” – the cunning spider wondered, and you immediately remembered that only a few years ago he had heard something like that in Niame’s house.
“I remembered! These are the sons of Niame. His young wife was innocent and was unfairly punished.
Immediately, the spider rushed to go to Niame to let him know what he had found.
The hunter saw Annanse, and knowing his cunning, he realized that he would knowingly divulge his secret. He called the children and told them:

– My children, it’s time to find out who your real father is.

So the next morning, they put on their best clothes, took a lot of food, and set off on their way. Shortly after they arrived at Niame’s house, the hunter called him out and told him:

Niame went out and got to watch the silver boy, who was making strange movements. At the same time, the golden boy sang along with his song about their misery from the moment when their mother promised to give birth to a golden child, about their birth and Acko’s insidiousness. It sang the kindness of the hunter who raised and loved them as native children, instead of killing them to possess all their gold and silver.
Niame listened thoughtfully and when he heard everything, he hugged his sons and ordered them to bring his wife from a distant forest.
When the woman arrived, she was sunk all over in mud and with long and matted hair. Niame immediately ordered her to wash, comb her and put on the best clothes. Then everyone marveled at the unprecedented beauty of the young woman, who had not abhorred the long exile and loneliness.
Then he sent to find the bad Acoco, took her to the end of his possessions, and threw her down. But before that, he turned her into a hen, commanding every time he thirsted, to raise his head and ask for his permission for every sip of water.
Finally he praised the hunter, made him many presents and sent him home with honors.
And as for the sons of Niame, they go once a year to bathe in the great river, which descends like a waterfall to the lowland. Then a little of their gold and silver pollen reaches the people who skillfully and skillfully sift it from the golden sands. 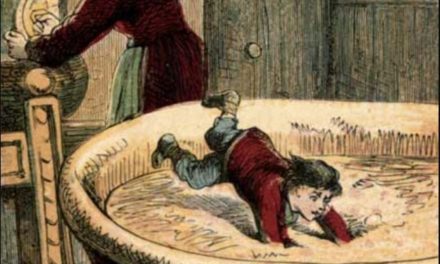