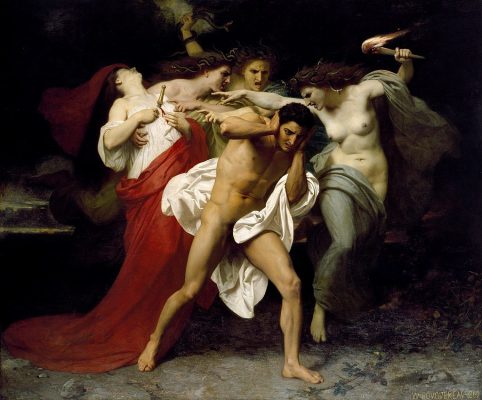 In this article we will look at some examples from the distant past, the recent past and fantasy-inspired musical compositions.
Of course, these examples do not capture the whole history of music, nor do they represent a complete picture of the diversity of styles, because it would be a whole novel and this novel should be in several volumes.
The aim here is to show how the musical mythological tendency is preserved and developed in different eras.

It is interesting to note that the immense impulse of music in general is given by the respective religions of the epochs, beliefs and quests of man in the invisible.
As music is, according to some people, the most precious gift to humanity, it sounds perfectly logical the search for the soul and the search for music to come together in a beautiful composition of tones, chords, choirs, various instruments and interpretations.

Enjoyable reading and most of all … listening!

Music in the Past

Khurite anthem: a mystical ancient interpretation of the past found in Syria. It is dated to 1600 BC. The hymn is in honor of Nickal, the wife of the God of the Moon.
The oldest preserved overall tune in the world is recorded.

Nickal is the goddess of Ugarit / Canaan and later of Phoenicia. She is the Goddess of Orchards, whose name means “Big Lady and Fruitful.” The daughter of Hirhibi, the Summer King, and is married to moon god Yarich, who gives her paws of lapis lazuli. Their marriage is lyrically described in the Ugaritic text “Nikkal and Katyat”. Its Sumerian equivalent is the goddess Ningal, the mother of Inanna and Ereshkigal.

The oldest incompletely annotated piece of ancient music is a Hurian song, a hymn in a Ugaritic cuneiform syllabus, which was dedicated to Nical.

Saamaveda (Sanskrit: सामवेद, sāmaveda, from sāman “song” and veda “knowledge”) is the Veda of melodies and chants. This is an ancient Vedic Sanskrit text and part of the writings of Hinduism. One of the four Vedas, a liturgical text consisting of 1549 verses. All but 75 verses are taken from Rigveda. Three retreats of the Samaveda have survived and variant manuscripts of the Vedas have been found in different parts of India.

While its earliest parts are thought to date back to the Rigvedic period, the existing compilation dates from the period after the Rigvedic mantra of Vedic Sanskrit, c. 1200 or 1000 BC, approximately contemporary with Atharvaveda and Yajurveda.

Inside the Samaveda is the widely studied Chandogiya Upanishad and Kena Upanishad, regarded as the main Upanishad and influential in the six schools of Hindu philosophy, in particular the Vedanta school. The classical Indian music and dance tradition considers the chants and tunes in Samaveda one of its roots.

Katolophyromai (in Greek: κατολοφύρομαι), is the keynote in a musical fragment from Orestes’ first stazimon of Euripides (lines 338-344, Vienna Vienna Papyrus G 2315). It means “I cry, I complain so much.” In 1892, among a series of papers from Hermopolis, Egypt, in the collection of Archduke Rainer Ferdinand of Austria, the fragment was discovered and published by papyrologist Carl Veselli, containing a crippled passage with musical notation. Although the Viennese papyrus G 2315 dates from the 3rd century BC. NE, the tune recorded on it may have been written much earlier.

In accordance with the advice of the god Apollo, Orestes killed his mother Clytemnestra to avenge the death of her father Agamemnon at her hands. Despite Apollo’s earlier prediction, Orestes is tormented by Erinies or Fury for the blood guilt from his matricide. The only person able to calm Orestes from his madness is his sister Electra. To complicate matters further, Argos’s leading political faction wants to kill Orestes for the death of the murder. Orestes’ only hope of saving his life lies in his uncle Menelaus, who returned with Helen after spending ten years in Troy and accumulating wealth in Egypt for several more years. In the chronology of the events after Orestes, this play is performed after the events contained in plays such as “The Electra of Euripides and Sophocles” or “The Holders of Libation” by Aeschylus, and before events contained in plays such as “Emenides” by Aeschylus and ” Andromache “from Euripides.

The Seikilos epitaph is the oldest surviving overall musical composition, including musical notation, from anywhere in the world. The epitaph is dated differently, but seems to be from the 1st or 2nd century AD. The song, whose tune was recorded, along with her lyrics, in ancient Greek musical notation, was found engraved on a tombstone (stele) from the Hellenistic city of Trales near present-day Aydin, Turkey, not far from Ephesus. It is a Hellenistic Ionic song, either in the Phrygian octave or in Jastian tone. While there is older notation music (such as hurian songs), all of it is in fragments; Seikilos’ epitaph is unique in that it is a complete, albeit short, composition.

The following is the Greek text found on the tombstone (in the later polytonic script; the original is in the Majukula), together with a transliteration of the words sung in the melody, and a somewhat free English translation from it; this excludes music notation:

As you live, you shine,
no pain at all;
life only exists briefly
and Time demands its due.

After mythological and legendary epics in music, it has been developed for centuries in church choirs and religious liturgies of different faiths. The influence and awe can also be felt in the work of Mozart, who writes and composes his works in a religious context. Throughout his life, inspired by religion with his father’s acquaintances, who became his mentors, Mozart composed extremely stunning and powerful works that were astonishing, astonishing today.

The Requiem in D minor is a Requiem Mass by Wolfgang Amadeus Mozart (1756–1791). Mozart formed part of the Requiem in Vienna at the end of 1791, but it was unfinished at his death on December 5 of that year. A complete version by Franz Xavier Susmayer of 1792 was handed over to Count Franz von Walsseg, who ordered the piece for Requiem’s ​​service in honor of the anniversary of his wife’s death on February 14th.

This day of tears and mourning,
when the ashes will rise,
to judge all humanity.
Spare us with your mercy, Lord,
Lord Jesus,
give them eternal rest. Amen.

Der Ring des Nibelungen (The Ring of Nibelungen) is a series of four German-language epic musical dramas composed by Richard Wagner. The works are freely based on characters from the Norwegian sagas and Nibelung. The composer called the cycle “Bühnenfestspiel” (a stage festival play), structured in the three days preceded by Vorabend (“pre-evening”). It is often called the Ring Cycle, the Wagner Ring, or simply the Ring.

Wagner wrote the libretto and the music for about twenty-six years, from 1848 to 1874. The four parts that make up the Ring cycle are as follows:

For the long time since the gods had entered the Wallhall at the end of Das Rheingold, Fafner used Tarnhelma to take the form of a dragon, and kept the gold and the ring in the depths of the forest. Wotan visited Erd in search of wisdom and gave birth to a daughter, Brunhild; he gave birth to eight other daughters, probably also from Erd. The ones with Brunhilde are the Valkyries, whose task is to restore the fallen heroes and bring them to Valhalla, where they will protect the fortress from an attack by Albert, should the dwarf restore the ring. Wotan also wandered the earth, and with a woman of the race Wölung gave birth to twins Sigmund and Sieglind, who grew up separately and did not know each other. From Völsungs, Wotan hoped for a hero who, unencumbered by the treaties of the gods, would receive the Fafner ring.

The Lord of the Rings

Contemporary performances are increasingly seeing the characterization of a theme or character through music, melody, a whole orchestral performance colored by the downsides and upsides of the whole narrative.

Wagner promotes the idea of ​​a leitmotif, something Howard Shore very much uses, and so one can see a wonderful mythical bridge between Wagner and Schor at two different times, simultaneously writing mythological themes for his works.
The leitmotif is the connection through a musical work between a hero, a place, an object, a concept.

Howard Shore composed the album Lord of the Rings, and is perhaps the most comprehensive and complete soundtrack to describe a world dominated by characters. Places, events, landscapes – all with the powerful swing of Shore and a large team of professional performers. His entire work is about 4 years of writing, composing and arranging.

Inspired by British myths and legends, Tolkien wrote “The Lord of the Rings,” and Howard Shore honors the theme of the work and mysticism of the ancient world.

The theme music of the ring is inspired by Sauron’s growing threat to Middle-earth corruption over Smeagol, stealing into Frodo’s heart, the burden on the Sam Gandhi  and the designs and plans of darkness and evil.

The story of a little boy who learns he was admitted to the Hogwarts School of Magic. Seven books unfold the entire adventure of the little wizard, in which he grows up to be a responsible boy, a strong character, a good friend.

The main line of the entire series is the love that saves Harry from the deadly curse of the most powerful evil wizard of all time, and sacrifice in the name of good. As well as accepting the personal path and destiny, its realization through the heroic elements of a mythical hero in a fairy tale setting, which begins as a fantasy for children and slowly transforms into the black reality of the growing reality-facing hero.

The most famous theme music in the series is The Hedwig Theme. This is his loyal owl, which plays an important role at one time, and the rest is his loyal companion, who delivers mail (because in this fantastic world, magicians communicate through magical letters and owls).

The story of an alien from Krypton being fired by a shuttle while his home planet is destroyed by conflict. He lands on Earth with his father’s instructions, which later in adulthood, he understands where he came from. Until then, he has been raised in humane human values ​​in a farming family, revealing his power, maturing and beginning the transformation of the hero as the savior of the city of Metropolis, the savior of the world.

An interesting fact is that initially in the comics, Superman jumped very high, and due to confusion by a later comic book artist who made the character fly, so did the rest. Since then, it has been the most iconic superpower in addition to its enormous physical power, which, according to comics and animations, equals the mass of 15 suns.

One of the computer games in which Superman is involved is called “Injustice: Gods Among Us”. The title emphasizes the mysticisme of modern times and the danger of the immense power given to a few.

Hans Zimmer handles the film’s theme and the character’s origin in the film’s thematic rendition. Director Zack Snyder lends a dramatic and darker perspective to the burden of Superman – a deity among men.