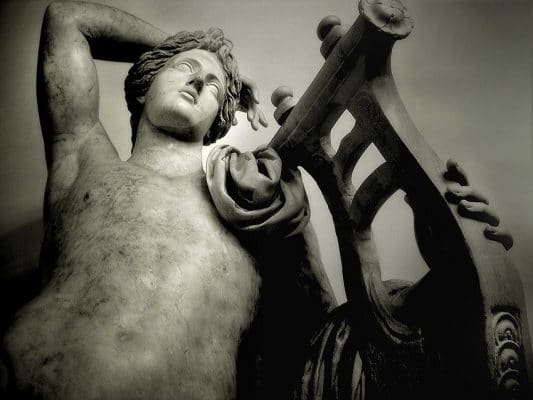 The god of light, the golden-haired Apollo, was born on the island of Delos. His mother, Latona, persecuted for the wrath of the goddess Hera, could not find refuge anywhere. Chased by the dragon Python, sent by Hera, she wandered around the world and finally hid on the island of Delos, which in those days was floating on the waves of the stormy sea. As soon as Latona set foot on Delos, two huge pillars rose from the abyss, supporting and stopping this desert island. He stood firm in the same place he stands now. The sea roared around Delos. The Delos rocks protruded dejectedly, bare, without any vegetation. Only the seagulls found shelter on these rocks and announced them with their sad cries. But here the god of light Apollo was born and streams of bright light spread everywhere. They flooded the rocks of Delos like gold. Everything around blossomed, shone: and the coastal rocks, and Mount Kint, and the valley, and the sea. The goddesses that came to Delos were loudly celebrating the birth of Apollo, offering him ragweed and nectar. The whole surrounding nature rejoiced together with the goddesses.

The young, radiant Apollo soared across the azure sky with a guitar (lyre) in his hands, a silver bow over his shoulder; golden arrows rang loudly in his archer. Proud, rejoicing, Apollo was soaring over the earth, threatening to destroy every evil, every one caused by darkness. He rushed to the place where the terrible Python lived, who had once pursued his mother Latona; he wanted revenge on him for all the harm he had done to her.

Apollo quickly reached the dark gorge where Python’s lair was. Rocks rose high in the sky. Darkness reigned over the gorge. A foaming white-maned mountain stream flowed violently along its bottom, and mists swirled over the stream. The dreaded Python came out of his lair. His huge body, covered with scales, wound between the rocks in countless hoops. Rocks and mountains trembled and succumbed to the weight of the body. The furious Python ravaged everything and sowed death on all sides. The nymphs and all living things fled in terror. Python rose, powerful, furious, opened his terrible mouth and was already preparing to swallow the golden-haired Apollo. But at that moment a sound was heard from the bowstring of the silver bow, and like a spark an infallible golden arrow shone in the air, followed by a second, a third; arrows rained down on Python, accompanied by the golden strings of his lyre. Apollo buried Python’s body in the ground at the site of the later city of Delphi, and founded a sanctuary with an oracle to reveal to him the will of his father Zeus.

From the high shore Apollo saw a ship of Cretan sailors far out to sea. Transformed into a dolphin, he threw himself into the blue sea, caught up with the ship and, like a shining star, flew on the waves and stood at the stern of the ship. Apollo, taking the ship to the pier of the port of Crisis and playing the lyre, led the sailors through a fertile valley to Delphi. He made them the first priests in his sanctuary.

Apollo had to cleanse from his sin for the shed blood of Python. After all, he himself cleanses the people who committed murder. And here, by decision of Zeus, he retired to Thessaly with the wonderful and noble king Admetus. He grazed the king’s flocks and with this service atoned for his sin. When Apollo played in the middle of the pasture on a reed flute or a golden lyre, the wild animals, fascinated by his playing, came out of the thicket. Panthers and lions walked meekly among the herds. Deer and roe deer flocked to the sounds of the flute. Peace and joy reigned all around. Prosperity flooded Admetus’s house; no one enjoyed such fertility as he did; his horses and herds were the best in all of Thessaly. All this was given to him by the golden god. Apollo helped Admetus get the hand of Alcestis (Lacesta), the daughter of the Iolian king Pelias. Her father had vowed to give her as a wife only to one who would be able to harness a lion and a bear in his chariot. Then Apollo endowed his beloved Admetus with invincible power and he fulfilled the condition set by Pelius. Apollo served Admetus for eight years, and when his redeeming service expired, he returned to Delphi.

In spring and summer Apollo lives in Delphi. And when autumn comes, the flowers begin to wither and the leaves of the trees turn yellow, as the cold winter approaches, which covers the top of Parnassus with snow, then Apollo sits in his chariot, drawn by snow-white swans, and she takes him to the land of the Hyperboreans. He does not know what winter is, in the land of eternal spring. He spends all winter there. And when everything in Delphi is green again, when the flowers bloom under the life-giving breath of spring and cover the valley of the Crisis like a variegated gubernia, the golden-haired Apollo returns with his swans to Delphi to foretell to the people the will of the thunderer Zeus. Then in Delphi they celebrate the return of the prophet god Apollo from the side of the Hyperbporeans. He spent the whole spring and summer in Delphi, and visited his native island of Delos, which also has its own magnificent sanctuary.

Apollo and the Muses

In spring and summer on the slopes of the forested Helicon – where the sacred waters of the spring of Hippocrates mysteriously roar, and on the high Parnassus, near the clear waters of the Castal spring, Apollo leads the dances of the nine muses. The young beautiful muses, daughters of Zeus and Mnemosyne, are constant companions of Apollo. He also directs the people of the muses and accompanies their songs with his golden lyre. Apollo steps majestically in front of people of the muses with a laurel wreath over his forehead, followed by the nine muses: Kaliopa – muse of epic poetry, Evterpa – muse of lyrics, Erato – muse of love songs, Melpomene – muse of tragedy, Talia – muse of comedy, of history, Urania – the muse of astronomy, and Polychemy – the muse of the sacred hymns. Their chorus echoes solemnly and the whole nature listens to their divine singing as if enchanted.

When Apollo, accompanied by the muses, appears in the midst of a host of gods of the bright Olympus and the sounds of his lyre and the singing of the muses are heard, everything on Olympus falls silent. Ares forgets the noise of bloody battles, no lightning flashes in the hands of the cloud-eyed Zeus, the gods forget the quarrels, peace and tranquility reign on Olympus. Even the eagle of Zeus flutters its mighty wings and closes its penetrating eyes, its terrible cry is not heard, it gently sleeps on the scepter of Zeus. In complete silence, the strings of the Apollo lyre sound solemn. And when Apollo merrily strikes her golden strings, then a bright, shining dance winds in the hall for feasts of the gods. Muses, Hariti, the eternally young Aphrodite, Ares with Hermes, all take part in the merry dance, and are led by a strong virgin – the sister of Apollo, the beautiful Artemis. Dressed in streams of golden light, the young gods play to the sounds of the Apollo lyre.

But not only Apollo is an avenger, not only doom he sends with his golden arrows; he cures diseases. And the son of Apollo, Asclepius, is the god of doctors and the art of healing. The wise centaur Chiron raised Asclepius on the slopes of Mount Pelion. Under his leadership, Asclepius became such a skilled physician that he surpassed even his own teacher, Chiron. Asclepius not only cured all diseases, but even brought the dead back to life. With this he angered the ruler of the realm of the dead Hades and the thunderbolt Zeus, as he violated the law and order established by Zeus on earth. The enraged Zeus threw his lightning and defeated Aesculapius. But people worship the son of Apollo as a healing god. They built many sanctuaries for him, and among them the sanctuary of Aesculapius at Epidaurus.

Apollo was worshiped everywhere in Greece. The Greeks worshiped him as a god of light; as a god who cleanses man from the evil of shed blood as a god who reveals the will of his father Zeus and who punishes, sends diseases and cures them. Greek youth revered him as their patron. Apollo is the patron saint of navigation, he helped establish new colonies and cities. Artists, poets, singers and musicians are under the special patronage of the leader of the people of the muses, the guitar Apollo. According to the cult that the Greeks gave to Apollo, he is equal to Zeus the Thunderer himself. 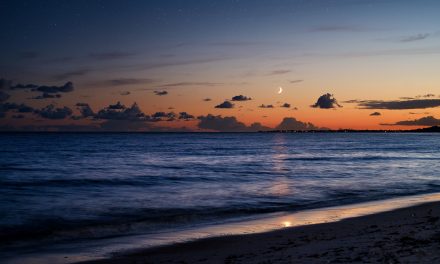 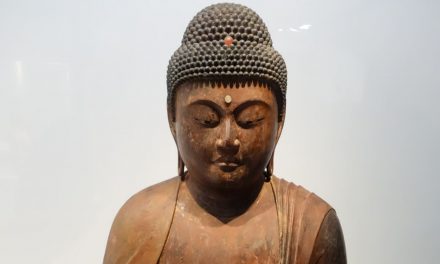 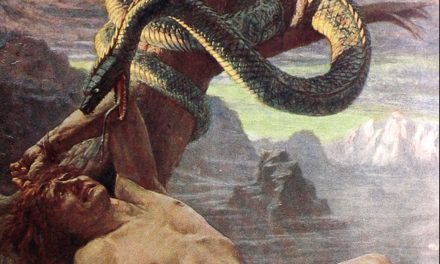 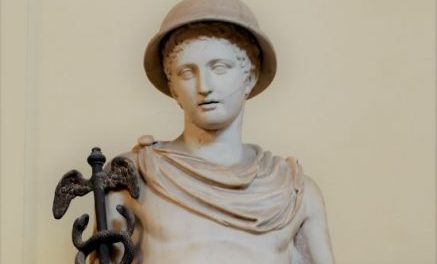