Alkion is a bird that loves deserted places and lives permanently in the sea. They say that in order to keep people from catching her, she breeds her little ones on the coastal rocks.
Once, when he was about to lay his eggs, an alkion landed on one nose and saw a rock in the sea. There he laid his eggs. But it happened that when one day he went looking for food, the sea, stirred by strong winds, rose up to the nest, flooded it and drowned the little ones. When the bird came back and realized what had happened, it said:
– I am unhappy! I wanted to protect myself from the evils of the earth and fled to the sea, and it proved even more treacherous to me.

So sometimes, people who guard against their enemies fall, without feeling, to friends who are worse than their enemies.

The Eagle & the Beetle

A Beetle once begged the Eagle to spare a Hare which had run to her for protection. But the Eagle pounced upon her prey, the sweep of her great wings tumbling the Beetle a dozen feet away. Furious at the disrespect shown her, the Beetle flew to the Eagle’s nest and rolled out the eggs. Not one did she spare. The Eagle’s grief and anger knew no bounds, but who had done the cruel deed she did not know.

Next year the Eagle built her nest far up on a mountain crag; but the Beetle found it and again destroyed the eggs. In despair the Eagle now implored great Jupiter to let her place her eggs in his lap. There none would dare harm them. But the Beetle buzzed about Jupiter’s head, and made him rise to drive her away; and the eggs rolled from his lap.

Now the Beetle told the reason for her action, and Jupiter had to acknowledge the justice of her cause. And they say that ever after, while the Eagle’s eggs lie in the nest in spring, the Beetle still sleeps in the ground. For so Jupiter commanded.

Even the weakest may find means to avenge a wrong. 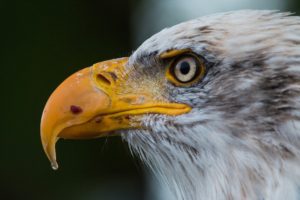 The eagle and the fox made friends and decided to live as neighbors – thus they wanted to solidify their friendship. The eagle rose to the top of a tree and bent a nest there, and the fox curled up in a mop below him and looked after the little ones.
But one day, as the fox came out into the food field, the eagle chased by hunger descended into the forest, grabbing the foxes and making a feast with his eagles. The fox came back, realized what had happened, and was left sad not so much by the death of her births as by her helplessness – she was a four-legged, unable to chase a bird. Therefore, speaking from afar, she cursed the villain – only this leaves the weak and helpless. But it was soon a came a time for the consequences for the eagle that broke this friendship. In the field, people sacrificed a goat. The eagle lowered and pulled the blazing liver away. He was carried to the nest, but a strong wind blew and a burning flame of small and dry straw burned. And the eagles – they were still very young – tumbled to the ground. The fox rushed in and in front of the eagle’s eyes, ate everyone.

The fable shows that those who transgress friendship can avoid repaying the offended, if they are weak – but the retribution will not erode them.

Nightingale perched on a tall tree sang as usual. He was caught by a hawk looking for food, came down and grabbed it. He caught the nightingale in his dying hour praying to let him go. He argued that he did not reach the hawk’s stomach; that the falcon when in need of food should target the larger birds. And the falcon interrupted him with the words:
“Am I so stupid as to throw away ready-made food and chase some imaginative?”

And so between people: reckless are those who in the hope of receiving something more, lose what is in their hands.

The Cat & the Old Rat

There was once a Cat who was so watchful, that a Mouse hardly dared show the tip of his whiskers for fear of being eaten alive. That Cat seemed to be everywhere at once with his claws all ready for a pounce. At last the Mice kept so closely to their dens, that the Cat saw he would have to use his wits well to catch one. So one day he climbed up on a shelf and hung from it, head downward, as if he were dead, holding himself up by clinging to some ropes with one paw.

When the Mice peeped out and saw him in that position, they thought he had been hung up there in punishment for some misdeed. Very timidly at first they stuck out their heads and sniffed about carefully. But as nothing stirred, all trooped joyfully out to celebrate the death of the Cat.

Just then the Cat let go his hold, and before the Mice recovered from their surprise, he had made an end of three or four.

Now the Mice kept more strictly at home than ever. But the Cat, who was still hungry for Mice, knew more tricks than one. Rolling himself in flour until he was covered completely, he lay down in the flour bin, with one eye open for the Mice.

Sure enough, the Mice soon began to come out. To the Cat it was almost as if he already had a plump young Mouse under his claws, when an old Rat, who had had much experience with Cats and traps, and had even lost a part of his tail to pay for it, sat up at a safe distance from a hole in the wall where he lived.

“Take care!” he cried. “That may be a heap of meal, but it looks to me very much like the Cat. Whatever it is, it is wisest to keep at a safe distance.”

The wise do not let themselves be tricked a second time.